Vaping in School Causes Concerns for Many 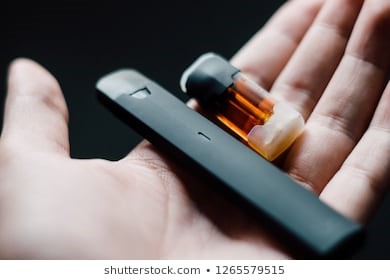 EDITORS NOTE: Two students were allowed to contribute to the story while remaining anonymous.

Vaping, although created as an alternative to smoking cigarettes, has created a new epidemic. Recently there has been an evident rise in the usage of vaping devices amongst teenagers everywhere.

As of 2018, 1 out of 5 high school students admitted to vaping. Vaping is spreading to grades even below those of high school students however. A survey taken by  2018 Monitoring the Future revealed that the percentage of eighth graders who vape rose from 13.3 to 17.6 percent.

This issue is present right here in Leominster High School as well and has been a topic of recent discussion. The usage of vape and juul devices by students is believed to be a possible result of insufficient educating on the matter said school officials.

Parents, teachers, and students seem to be unaware of the dangers about vaping. Some believe that teachers should become educated on the effects of vaping and begin teaching students about them in the regular class setting.

Already there have been more than twenty students that have been caught vaping at LHS since September.

According to some of the students it seems as though seeing vape related activity is becoming more and more common.

“I see many kids that I know vape, and I’ve seen it in the bathrooms before,” said a Leominster High Junior who requested to remain anonymous. “I know vaping isn’t beneficial in any way, and I believe there should be more severe punishments for it.”

There are many different kinds of devices available to students — some of the most popular being JUULs, Dab pens, SUORINs, etc. The devices themselves in most cases are small, making them easy to conceal, and the juices inside come in many different flavors that attract young users.  The small build allows these devices to be brought almost anywhere and hidden with little to no difficulty at all.

This is one reason students are able to use devices such as juuls and dab pens in school while attracting minimal suspicion.

At Leominster High steps have already been taken towards cutting down on the population of students vaping, especially in school.

Faculty attempted to cut down on the in school vaping by locking all of the school bathrooms except one. “I had nowhere to vape” said Vape User 1.

Many students were outraged when the administration locked the bathrooms. “The more the school retaliates, the more it will occur,” warned Vape User 2.

“Smokers and vapers are going to figure out other ways to do it regardless, it is inevitable” said Vape User 2. This student (at LHS) felt strongly about the topic of vape and punishment for it.

Even after making it clear that students have many different reasons to vape such as calming nerves, coping with stress, and passing time, etc. Vape User 2 did say that he/she believes it is reasonable that students are punished for being caught vaping on school grounds.

However this student expressed how he/she felt the punishments vapers receive are unreasonable and can even interfere with their home and school lives.

“Missing time in school interferes with their education, could lead to academic failure, and may even cause trouble with parents at home,” said Vape User 2.

In speaking to School Resource Officer Eric Craig, he admitted that while locking the doors didn’t stop vaping, it “sent a strong message.” The message being that the administration is onto the vaping and they are cracking down.

Dubzinski spoke about the consequences of being caught vaping in school and how punishment should be accompanied by educational programs as well.

He doesn’t like the idea of suspension. Keeping kids out of school is the last thing he wants to do as a principal.

Dubzinski explained that he attends meetings with 32 other principals from schools in surrounding areas and how the first discussion always seems to be about vaping. He then went on to talk about how he believes having a speaker with a personal experience with vaping could be an effective strategy to combat students’ urges to vape.

Dubzinski made it clear that with issues such as teen vaping, a solution cannot be found without individual’s first educating themselves on the matter. He stressed the belief that as more people learn about the effects of vaping, the numbers of people who do it will decrease.

Websites such as https://www.yalemedicine.org/stories/teen-vaping/  give more depth about the risks of teen vaping. Follow the link to learn more information.