GAME REVIEW: Five Nights At Freddy’s: Security Breach, Is it Worth the Hype? 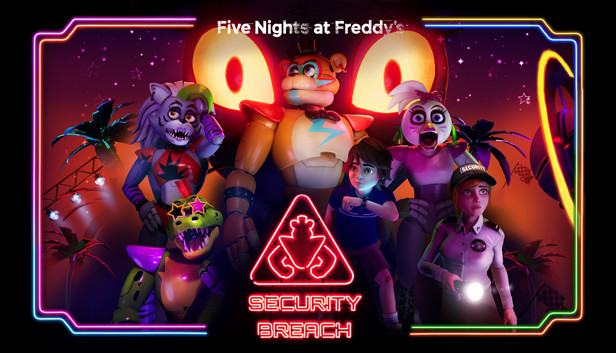 Five Nights at Freddy’s is a well-known and loved video game series, especially by the younger generation. The majority of youths, including myself, grew up going to Chuck-E Cheese, playing games, collecting tickets, eating pizza, and getting a lovely show from singing animatronics. To see a game take this idea, something as innocent and as friendly singing robots, and turn it into something that will keep you awake at night appealed to the masses. It revolutionized survival horror games, but Security Breach failed to do the same.

Scott Cawthon, the creator of the franchise, does deserve credit where it’s needed. Security Breach is nothing we have ever seen before in regards to the FNAF series. It was arguably the most in-depth lore-ridden game. The graphics and animation for the game were amazing. The creators really went above and beyond and the difference in quality is very noticeable. We get to see Chica and Freddy, the two original characters, all decked out looking like real rock stars. Their designs fit the aesthetic of the game perfectly. The ability to see your character and move and explore the map free of will was refreshing and exciting. You were no longer stuck in a single room looking at cameras waiting to get jump scared.

However, since this was a new feature added to the series, many issues came along with it.

One of the biggest issues I had with the game was the fact that characters would de-spawn and spawn at any given moment. This would often play to my disadvantage. As I was escaping an animatronic, I would enter an area of the map I knew was safe, but then suddenly Chica would spawn right in front of me ready to tear my character’s head off. It was frustrating and almost made it unenjoyable.

The system’s skipping, frame jumps, and overall glitches were also an annoyance, and in my opinion,  something that could’ve easily been avoided.

The map of the game was huge which made the game difficult to play. The vastness of the pizza plex left players, including myself very confused. It was extremely easy to lose track of where you were in the game. Finding places for missions and tasks you had to complete would take a long time. Hours into the game players should feel as though they finally have an understanding of the layout of the map, but that wasn’t the case.

Security Breach was not the game the trailer had displayed. It threw me and a lot of other players off. The trailer that was released in February of 2021, introduced two new characters with a deeply disturbing voice that was never heard in the actual game. These characters were extremely underwhelming. The trailer made it out to be something it wasn’t. The addition of these two new characters left a lot of holes and unanswered questions in the lore.

Any FNAF fan would expect that after 8 years, some questions would be answered, but they weren’t. FNAF is a lore-heavy franchise; it feels as though Cawthon left it to the fans to create theories and answers that he doesn’t have. The game was not as scary as the trailer made it out to be. The jump scares were mediocre at best, you become desensitized to them very quickly as they happen more often than they should.

Five Nights at Freddy’s:  Security Breach is worth playing especially if you’re a fan of the horror series. It was completely different from the prior games which was refreshing and exciting.

But if you’re playing it for the horror and lore aspect expect to be underwhelmed. Overall the game design-wise was enjoyable, but I expected better from Cawthon and the creators.